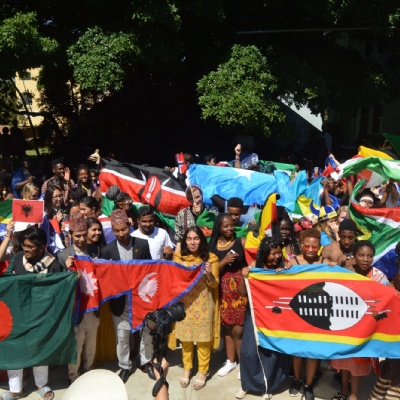 On Saturday, 7th April 2018, Waterford Kamhlaba UWCSA celebrated the annual UWC Day on school campus to celebrate the diversity of the school, the different nationalities and its cultures through food, music and performances.

This year’s UWC day was particularly special as it marked Waterford’s 55th anniversary. The event was joined by Michael Attenborough as the guest speaker and his wife, Karen Attenborough. During assembly, his speech inspired many students. He said, “You can kill a dreamer, but not the dream. Today I saw the future in this school. If each and every one of you keep dreaming, you can all become important people who can make change and impact the world in the future.” In relation to this year’s theme “Freedom is...”, he also talked about the importance of freedom from different perspectives. His speech was followed by music and poetry, and the parade of nations.

The event this year was also marked with two moments of silence; for Mama Nomzamo Winnie Madikizela- Mandela and Inkhosikati Make LaMasango, who both tragically passed away the week leading up to the UWC Day.

After assembly, students, parents and guests went onto the field to enjoy the different and unique tastes from various countries. There were over  10 stalls which represented over 50 nationalities, including Germany, South Asia, South Africa, South Korea, Swaziland, Mozambique, Portugal, India, USA, Latin America and West Africa. Our Waterford students put in lots of effort to heading their stalls, from cooking of the various dishes and decorating the stalls to selling and cleaning up.

It was a successful day where everyone truly got the chance to enjoy and experience the different culture and foods, and interact with people from all over the globe. We would like to thank everyone who made this day possible, especially the members of the Link Group who organised the whole event. We really hope that next year will also be as great as this year’s UWC Day.

“UWC Day was a very a happy day where everyone interacted with each other regardless the division between form and IB. By the end of the event, I was tired and very full because I had so much food but I loved it.”

“I was looking forward to UWC Day since before coming to Waterford Kamhlaba UWCSA, especially after watching the video from 2017 which really put my hopes high. As the first Thai student here at Waterford, I was very happy and proud to represent my country in front of the whole school with my national attire and the national flag. One of my favourite stalls was the South Korean stall which was very popular with the delicious food. Today was absolutely an amazing day with great food, music and performances, and it definitely did not let me down.